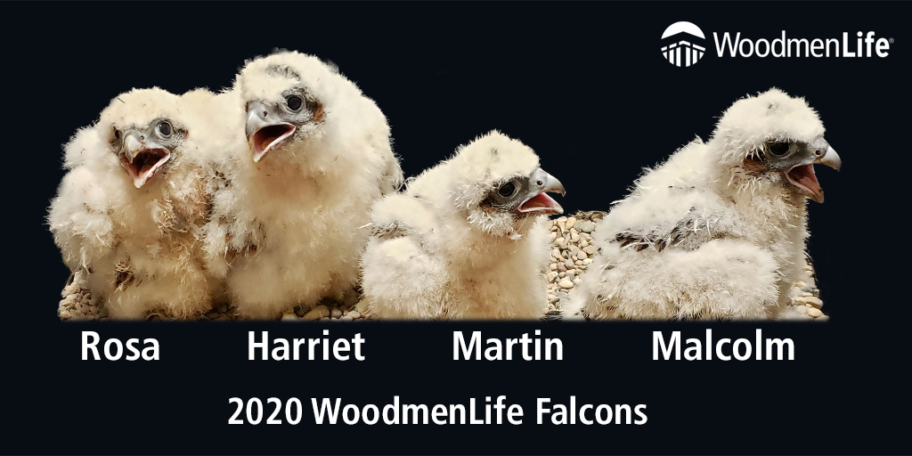 The year 2020 will be remembered for many reasons. The four peregrine falcons hatched atop the WoodmenLife Tower this spring are also sure to leave a historical imprint, if their names are any indication.

This year, a pair of falcons, assumed to be Mintaka and Chayton, WoodmenLife’s resident falcon pair, produced four eggs in late March. All four hatched in early May. Due to COVID-19 restrictions, WoodmenLife was unable to host its annual falcon banding, and instead, opted to do it virtually on Facebook.

People from across the country submitted names in WoodmenLife’s annual falcon-naming contest for the four chicks, and the public voted on the top five submissions. With hundreds of votes cast, the winning name group — Rosa, Harriet, Martin and Malcolm, inspired by the names of famous African American Civil Rights activists — garnered more than 30% of the votes.

The falcons have been a staple at WoodmenLife for decades, introduced to the tower by the Nebraska Peregrine Falcon Project in the late 1980’s. An effort to help boost the population of the once endangered species was very successful. With the adaption to urban city life, peregrine falcons now regularly nest at the top of the WoodmenLife Tower.

On May 27, Fontenelle Forest Raptor Recovery was able to quickly band the hatchlings and determine their genders. They identified three females and one male. The banding of the birds is important to help wildlife experts identify falcons, as well as determine where they were born.

The four chicks now spend most of their time on the ledge of the 28th floor, developing their wings in preparation for their departure in the coming weeks. The birds can be watched through a live feed on WoodmenLife’s falcon cam.

WoodmenLife was founded in 1890 as a not-for-profit. The organization gives back to its members across the country, who join together in a shared commitment to family, community and country. With a legacy of financial stability, WoodmenLife offers quality life insurance and retirement products. A person becomes a member when they purchase a WoodmenLife product. To learn more about the organization and the extras members have access to, visit WoodmenLife.org 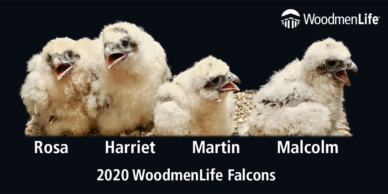