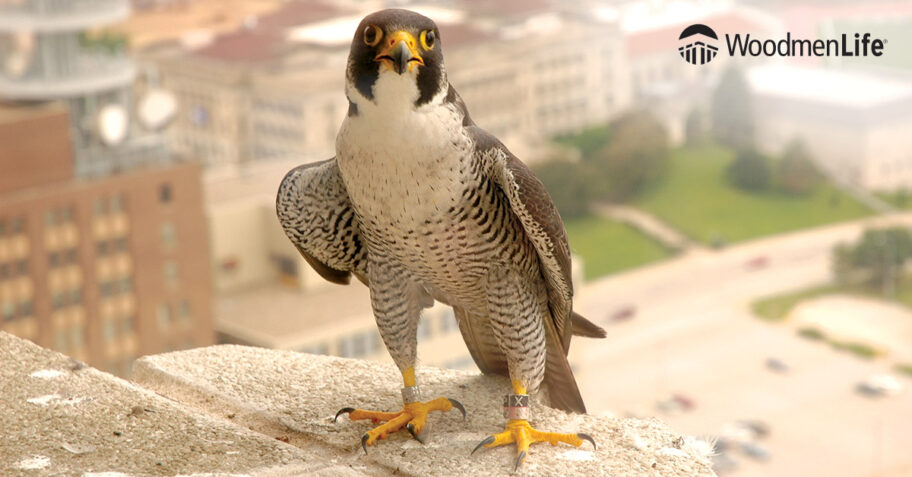 The History of WoodmenLife’s Peregrine Falcons

We’re Ready for Our Peregrine Falcons to Raise Their Young

There are well-known rituals of spring, including the arrival of robins in our yards and trees. At WoodmenLife Tower in downtown Omaha, another springtime ritual has been taking place since the late 1980s. That’s when a pair of peregrine falcons prepare a nest, hatch and raise their young, and teach them to fly — before doing it all again the next spring. Every time they put their brood into the sky on its way to another destination, they continue a great comeback story.

Back From the Brink

In the 1950s, the peregrine falcon population plummeted because of poisoning from the pesticide DDT. The species was placed on the endangered list, and scientists began breeding peregrines in captivity for release into the wild.

Some of these birds migrated to skyscrapers in eastern cities. As cliff dwellers, peregrine falcons flourished in urban settings, where tall buildings are plentiful, and feasted on pigeons and starlings.

Biologists recognized this adaptation to city living and began releasing them on urban rooftops. That’s where the WoodmenLife Tower comes in. In 1988, the Nebraska Peregrine Falcon Project released a pair of peregrine falcons atop the building, which was the tallest in Omaha at the time.

Since then, falcons have returned to continue what their ancestors started. And in 1992 three chicks — Aerial, Zenith and Skywalker — hatched! They were the first peregrines known to do so in Nebraska in nearly a century.

That sort of success across the country led to the species’ removal from the endangered list in 1999.

Peregrines who have hatched in Omaha have found their way across the country and even to another continent. We know this because we’ve long worked with experts, like Fontenelle Forest Raptor Recovery and Nebraska Game and Parks, to band chicks. The bands have personalized numbers that can be identified when they’re spotted somewhere else.

Here are a few highlights:

Willow, a female who hatched in 2009, was found nesting in Elgin, IL, with an unbanded male. In 2011, she laid three eggs, but unfortunately, none hatched.

Zenith, who hatched in 1992, nested in Cleveland for years. She became one of the top producers of chicks in the Midwest. On March 28, 2002, Zenith was killed in a battle for territory by a female falcon from Pittsburgh, PA. (Peregrines can be very territorial when they are nesting. They are aggressive toward intruders and these conflicts can result in death.)

Goldie, who hatched in 1999, was nesting in Fargo, ND. She did not return in the spring of 2002, and presumably did not survive the winter.

Husker, a female who hatched in 1998, has long nested in Red Wing, MN. Husker was originally thought to be a male until DNA tests on her blood proved she was, in fact, a female.

If you’re lucky enough to spot a peregrine, it’d be helpful to have some knowledge about this special bird.

Tops on most lists has to be their speed. They are the fastest animal on earth, capable of 238 mph in a dive to pursue prey. To put that in perspective, the average speed at the 2021 Daytona 500 was about 145 mph.

If you don’t have a stopwatch on you, here’s what to look for:

Finding one won’t be the most unusual of bird sightings, given their adaptation to urban settings and their distribution. The peregrine falcon has one of the most far-reaching distributions of any bird of prey. Peregrines are found on every continent except Antarctica, and live in a wide variety of habitat, from tropical and desert to maritime and tundra, and from sea level to 12,000 feet.

When they nest in Omaha each spring, the peregrines find plenty of starlings and pigeons on the menu, but they also hunt blackbirds, jays, shorebirds, and waterfowl. They’ll also occasionally hunt mammals, reptiles and insects.

When the time comes to raise their family. Peregrines lay between three and five eggs (one every other day) that are incubated for approximately 34 days. The young falcons fledge five to six weeks after hatching.

Once they leave the nest, they are not welcome back home. They must find their own hunting ground. Off they go to start their own springtime rituals.

Visit WoodmenLife.org/Falcons to keep track of this year’s peregrines atop the WoodmenLife Tower. 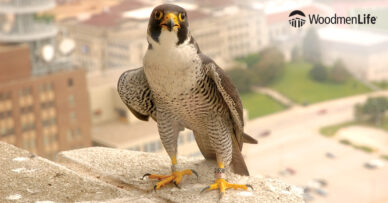