On Monday, June 15, we announced the winning names of the 2020 Falcon Naming Contest, our annual event that allows people from across the country to submit and vote on names for the falcon hatchlings each spring. 2020 has been a historic year, and the winning names are inspired by historical African American Civil Rights activists. The set of winning names that included Rosa, Harriet, Martin, and Malcolm received 30% of the hundreds of votes. They were submitted by Michelle Abner of Omaha, NE.

This year, it’s believed our resident falcons, Mintaka and Chayton, produced the four eggs in late March. Though things were a bit different this falcon season, life remained the same for the family up on the 28th floor. Thanks to Fontenelle Forest Raptor Recovery, the falcons were quickly banded and have their genders determined. They identified three females and one male. Due to COVID-19 restrictions, we were unable to host our annual falcon banding and opted to do it virtually. If you missed it, the banding video is available on the WoodmenLife Facebook page.

Falcon banding is essential to help wildlife researchers identify peregrine falcons, as well as determine where they are born. It helps ensure this once endangered species continues to flourish. Peregrine falcons have been residents at WoodmenLife for decades, introduced to the Tower in 1988 by the Nebraska Peregrine Falcon Project, to help the population bounce back. Peregrines adapted to urban city life well, with skyscrapers to nest on and plenty of other birds to feast on. The bird was moved off the endangered species list in 1999.

As the falcon season comes to an end, the four hatchlings spend a majority of their time hanging out on the ledge of the 28th floor. In the coming weeks, we’ll be wishing Rosa, Harriet, Martin, and Malcolm farewell, as they depart from the WoodmenLife Tower to start their journey through life.

See what the falcons are up to by watching the WoodmenLife falcon cam! Want to learn more about our falcons? Visit the falcon page on our website! 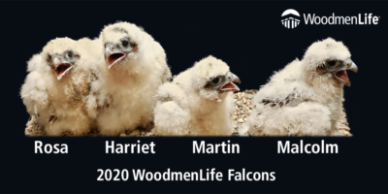